In 2013, the GADRA Matric School ranked only 20th on the Rhodes University Feeder Schools list. GADRA Matric School achieved the milestone of becoming Rhodes University’s biggest feeder school in 2015, with 50 students from the Class of 2015 registering at Rhodes in 2016. By 2019, the School became Rhodes University’s single biggest producer of graduates. In 2021, a record of over 50 GADRA alumni graduated from Rhodes in a single graduation ceremony (28 - 30 April 2021). GADRA now produces considerably more Rhodes graduates than any other school, public or private. This triumph came with dedicated and strategic focus on the part of GADRA Education management, staff, and students. What makes the most recent milestone especially significant is that it was achieved DESPITE the massive academic challenges associated with Covid-lockdown of 2020.

How did GMS Achieve this?

The GADRA Matric School was founded in 1994. For the first twenty years of its existence, it was a successful all-purpose ‘2nd chance’ school. It assisted a wide range of students, in all manner of academic situations, to upgrade their results. However, about a decade ago GADRA increasingly asked a fundamentally important question: how are the upgraded results actually benefitting the students?

In order to answer the question, the organisation undertook research into state of the South African labour market. This investigation pointed to the following key facts:

Based on these findings, the organisation deliberately sought to reposition for school and change its character from being an all-purpose 2nd chance school to a top-end bridging institution. Specifically, it sought to enable a much bigger proportion of its students perform well enough to gain meaningful access to the premier university in the Eastern Cape, namely Rhodes University, for bachelor degree study. In order to enable this transformation, the organisation implemented the following strategies:

There are many GMS success stories. Two of these are presented below. Linda Rulumeni from the GMS Class of 2015 who graduated with a BSc Honours degree in 2021, said the following about GMS in a recent Facebook post, “Thank you so much GADRA Matric School. It is all because of that one year we spent with you...Your staff is amazing and gave us hope when we really needed it the most. GADRA restored our confidence and made us believe that we can make it, and guess what WE DID! Ndiyabulela, enkosi and God bless everyone involved in making GADRA Education what it is.”

Anelisa is a prime example of triumph over difficult personal circumstances. Her success was given impetus by her year at the GADRA Matric School in 2015. An orphan from a poor rural village in Keiskammahoek, she moved to Grahamstown on the invitation of Dr Westaway and his wife, Lise, (pictured right with Anelisa). She attended the GADRA Matric School and improved her NSC results dramatically, enabling her to submit a successful application to Rhodes, where she registered in 2016 and moved into Residence. In 2020 she graduated with a Bachelor of Social Sciences, with distinctions in both her major subjects. This earned her a coveted place on the Dean’s List. In 2021 she obtained her Honours degree, again obtaining a distinction. On the basis of her outstanding achievements, she was awarded Academic Colours. 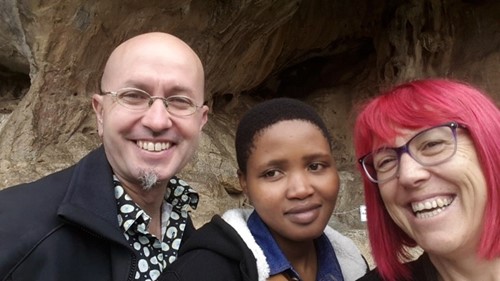 Nolutho Ncipa (GMS 2014) came to GMS from Nathaniel Nyaluza High School in Grahamstown with a Diploma-level pass. She attained a Bachelor-level pass and 37.7 Rhodes University points in 2014 and was accepted for Rhodes in 2015. She went on to graduate in 2018 (Nolutho is pictured right front with other GMS 2018 graduates) with a Bachelor Social Science and Honours in Organisation Psychology in 2019. She was accepted into an HR Internship programme in Cape Town the following year and was starting a second internship in Grahamstown in 2021 but has now returned to work at the GADRA Matric School as Administrator. 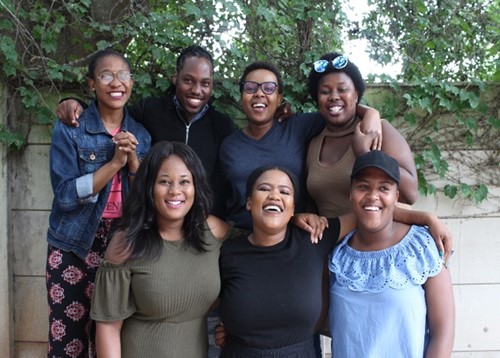